Discover the New Testament sites of Nazareth and the Sea of Galilee. In Nazareth, Jesus’ childhood home, explore the Church of the Annunciation and Church of St Joseph. After your Nazareth tour, visit some fabled miracle locations around the Sea of Galilee including the site of Tabgha. Visit Capernaum and then pass through Tiberias on route to the Jordan River, with the chance to be baptized in its waters. 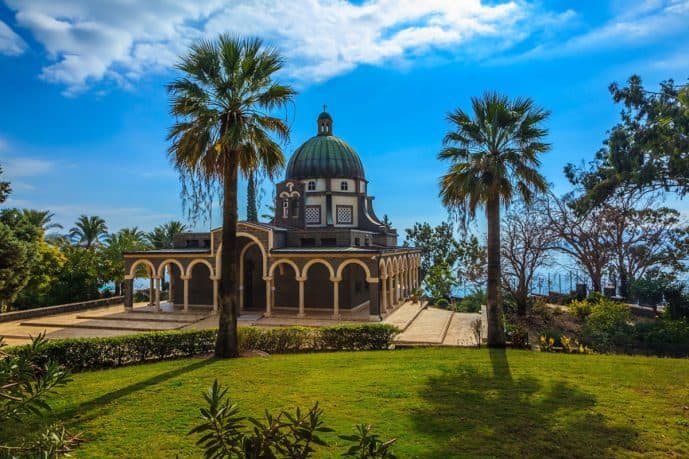 Departure from your pickup point to Nazareth, city of religion and faith, of spirituality and holiness, but also a city with a rich history, fascinating archaeology, modern culture and Middle Eastern charm. Nazareth, which began as a small Jewish village about 2,000 years ago, became a stronghold of Christianity in the Byzantine period, just a few hundred years later.

Continue onward via Cana (Kfar Kana) to view the Mount of Beatitudes and Church of the Multiplication of the Loaves and Fish at Tabgha. Set on the northwest shore of the Sea of Galilee, you will stop to view the sea, and continue to the nearby ruins of the ancient synagogue of Capernaum.

Proceed to Yardenit, situated on the banks of the Jordan River, flowing forth from the Sea of Galilee, the baptismal site of Yardenit welcomes over half a million tourists and pilgrims annually who come to experience the spirituality and pastoral beauty of the waters of the River Jordan, in which Jesus was baptized by John the Baptist.

Yardenit considered the third most holy site in the Holy Land, just after Nativity Grotto in Bethlehem and Golgotha in Jerusalem, because it is the site of the most important event of Jesus’ life – his baptism and beginning of his ministry. The site offers 12 separate baptismal pools, enabling different groups to comfortably conduct private worship ceremonies.

On our way back, we will get a chance to see Mt. Tabor, the site of transfiguration. Return transfer to pickup point.