Visit Bethlehem, The Church of the Nativity where Jesus was born. Discover the Old City of Jerusalem. Explore the Via Dolorosa, follow 14 Stations of the Cross to the Church of the Holy Sepulchre.  See the Western Wall and wander the holiest city on Earth. 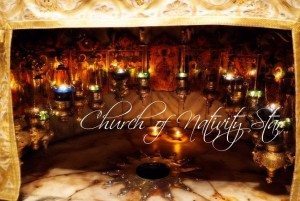 Spend a full day exploring the cities of Jerusalem and Bethlehem, tour that takes you to sites of religious and historical importance, including UNESCO World Heritage sites. We start on Mount Scopus with a panoramic view of Jerusalem. Then we pass the Garden of Gethsemane, Church of All Nations and Kidron Valley to reach the Old City.

Enter the Old City and walk through the Armenian and Jewish quarters to the recently excavated and restored Cardo, the Roman Road.

The southern part of the Cardo, uncovered in the Jewish Quarter, was built during the reign of the emperor Justinian (527-565), as a continuation of the earlier, Roman, northern part, thus linking the two main churches of Byzantine Jerusalem the Holy Sepulcher and the Nea Church.

See the Jewish Wailing Wall, The Kotel. The Wailing Wall or Western Wall is an ancient limestone wall in the Old City of Jerusalem. It is a relatively small segment of a far longer ancient retaining wall, known also in its entirety as the “Western Wall”. The Western Wall’s holiness in Judaism is a result of its proximity to the Temple Mount. Because of the Temple Mount entry restrictions, the Wall is the holiest place where Jews are permitted to pray, though the Foundation Stone, the most sacred site in the Jewish faith, lies behind it.

Continue to the Christian Quarter.  Walk along the Via Dolorosa and visit the Church of Holy Sepulchre.

The Via Dolorosa is a processional route in the Old City of Jerusalem. It represents the path that Jesus would have taken, forced by the Roman soldiers, on the way to his crucifixion.  Via Dolorosa (Latin for “Sorrowful Way” or “Way of Suffering”) is a narrow, stone path believed to be the route Jesus took to His Crucifixion nearly 2000 years ago. … It is here that Christians relive and celebrate Christ’s Passion, Death and Resurrection. The Via Dolorosa is filled with religion and ritual.

The Church of the Holy Sepulcher is the most sacred site in the world for millions of Christians. This is the site of the crucifixion, burial and resurrection of Jesus. Helena identified this place as The Calvary, where Jesus was crucified.  Calvary, or Golgotha, (Aramaic: “Skull”) also called Calvary, (from Latin calva: “bald head” or “skull”), skull-shaped hill in ancient Jerusalem, the site of Jesus’ crucifixion. It is referred to in all four Gospels (Matthew 27:33, Mark 15:22, Luke 23:33, and John 19:17). According to the New Testament, Jesus was crucified at a spot outside Jerusalem called Golgotha, which in Aramaic means “place of the skull.” The Latin word for skull is calvaria, and in English many Christians refer to the site of the crucifixion as Calvary.

Second part of your tour continue on to Bethlehem. Drive towards Bethlehem via the Nativity Circle and visit Bethlehem’s Manger Square, named after the manger Jesus was born in. Manger Square is home to the Church of the Nativity, one of the world’s oldest-standing churches still functioning to this day.

Underneath the Church stands the Grotto of the Nativity, the cave in which Jesus was born, the exact spot of birth is marked by a 14-pointed star of silver set into the floor.

If possible, we also visit the adjacent Church of Saint Catherine where we descend to subterranean caves and see sacred tombs and chapels. We make our way back to Jerusalem passing the Church of the Angels in Shepherds Field and the Field of Ruth where King David’s great grandmother met Boaz. Return to point of pickup.

*Important information: The tour is subject to Palestinian authority regulations. Passports are required.