Visit the highlights of the Holy land. Guided tour in  the Bible Land of Israel for 6 days 5 nights. We offer you Holy Land of Israel Christian tour package for 5 nights 6 days especially for those, who decided to visit Holy Land for the first time and want to see all the most important Christian sites. Sites you have read in the Bible will become a life and you will have the opportunity to follow Jesus footsteps.  Tour packages we offer guided by the most qualified Israeli tour guides in Israel. *The tours’ order is subject to change, according to your arrival day. Minimum 2 people per booking. Tour package available every day. You can start your trip any day you want in 2022 & 2023.

Welcome to the land of Israel for your Holy Land tour. We will meet you at the Ben Gurion airport, where one of our representatives will wait you in the arrival hall with your name sign, you can’t miss it. Transfer to your hotel with our company driver. We make sure checked in to your hotel and all set. You’ll have a chance to freshen up and, depending on your arrival time, explore the area around your hotel.

The day begins by discovering Jerusalem and Bethlehem, Holiest cities in the world. Pickup from the hotel lobby, front desk. 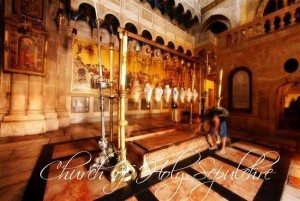 Spend a full day exploring the cities of Jerusalem and Bethlehem, the tour that takes you to sites of religious and historical importance, including UNESCO World Heritage sites. Drive first to the Mount of Olives for a panoramic view of Jerusalem old city. Stop at Mount Zion to visit King David’s Tomb, the Room of the Last Supper, and Dormition Abbey.

Then enter the Old City and walk through the Armenian and Jewish Quarters to the recently excavated and restored Cardo, the Roman road.

See the Jewish Western Wall, the Kotel, and continue to the Christian Quarter. Walk along the Via Dolorosa and visit the Church of the Holy Sepulchre.

The second part of your tour continues on to Bethlehem. Drive towards Bethlehem via the Nativity Circle and visit Bethlehem’s Manger Square, named after the manger Jesus was born in. Manger Square is home to the Church of the Nativity, one of the world’s oldest standing churches still functioning to this day. 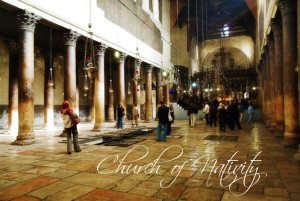 Underneath the Church stands the Grotto of the Nativity, the cave in which Jesus was born, the exact spot of birth is marked by a 14-pointed star of silver set into the floor. Milk Grotto, where Mary nursed her son. A Franciscan Chapel is built above the Milk Grotto. 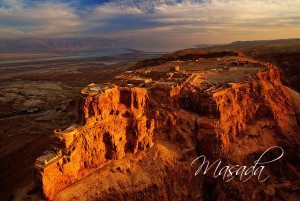 Descend to the Judean Desert via the inn of the Good Samaritan. Drive along the shores of the Dead Sea to Masada where you will learn about the heroic story of the Jewish fighters. Ascend Masada by cable car to tour the 2000 year old fortress and palace built by King Herod, where the Zealots of the first century made their last stand against the Romans.  This is the largest and most complete Roman siege camp that remains today. Visit the remains of the walls, palace, synagogue, water cisterns, mosaic floors, roman baths and other findings. In 2001 UNESCO declared Masada as a World Heritage Site. Descend by Cable Car.

Drive via Ein Gedi, passing by Qumran where you will get a side view of the Qumran caves where the Dead Sea Scrolls were discovered.

Continue to the Dead Sea. Float in the mineral-rich Dead Sea which, at 400m below sea level, is the lowest place on earth. Take a mud-bath and benefit from the therapeutic qualities of the natural Dead Sea mud. Enjoy the unique opportunity to float in the Dead Sea and cover yourself with the mineral rich mud, that many believe has its therapeutic effects. Return transfer to pick up point.

Check out from the hotel in Jerusalem. Today we are shifting gears; we change direction heading North Israel. The destination is Nazareth, Tabgha, Capernaum and the Sea of Galilee and Jordan River Yardenit. 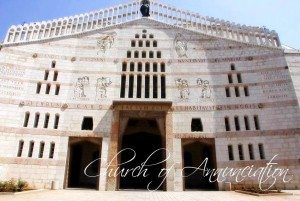 The first gem of your tour will be Nazareth city of religion and faith, of spirituality and holiness, but also a city with a rich history, fascinating archaeology, modern culture and Middle Eastern charm. Nazareth, which began as a small Jewish village about 2,000 years ago, became a stronghold of Christianity in the Byzantine period, just a few hundred years later. During that period the name of Nazareth spread far and wide, and the yearnings to see the place where the Virgin Mary and Jesus Christ had lived turned the city into a popular pilgrimage site. We will visit the Church of Annunciation and the Church of St. Josef. 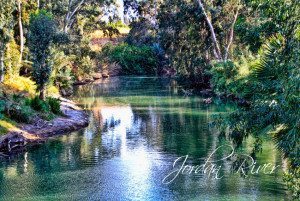 After Nazareth, we continue our way through Kana to Tiberias, Sea of Galilee. We drive along Kineret Lake to visit Capernaum. Next, we visit Tabgha, located at the foot of Golan Heights, site of the miracle of fish and loaves.

Proceed to Yardenit, situated on the banks of the Jordan River, flowing forth from the Sea of Galilee, the baptismal site of Yardenit welcomes over half a million tourists and pilgrims annually who come to experience the spirituality and pastoral beauty of the waters of the River Jordan, in which Jesus was baptized by John the Baptist.

According to the Christian faith, the Jordan River YARDENIT is considered the third most holy site in the Holy Land, just after Nativity Grotto in Bethlehem and Golgotha in Jerusalem, because it is the site of the most important event of Jesus’ life – his baptism and beginning of his ministry. The site offers 12 separate baptismal pools, enabling different groups to comfortably conduct private worship ceremonies. Return transfer to hotel in Tel Aviv after the tour. 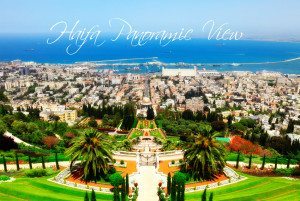 Pickup from hotel. Start Caesarea, Haifa, Rosh Hanikra and Akko full day tour. We drive along the coastal highway to Caesarea, city where past and the future come together. While new Caesarea is graced with magnificent modern homes, ancient Caesarea offers tourists the ruins of unique, impressive buildings. A tour of the national park is like walking through a story, and wandering between the ancient buildings one can both sense how people lived here thousands of years ago and enjoy modern, contemporary experiences, such as the enthralling musical performances held in the beautiful Roman Theater.

Next we proceed to Haifa, the pearl of this tour. Third largest city in Israel and one of its prettiest; Haifa has a lot to offer visitors. It has the Israel’s largest port, a particularly active beach and is the home of the World Center of the Bahai Faith. The Bahai’s originated in the Bab sect which separated from Iran’s Shi’ite Islam in 1844. The Bahai World Center, an expansive and well-designed complex on the slope of the Carmel, is famous for its magnificent gardens. It includes the exquisitely landscaped “Hanging Gardens” which run about a kilometer along the Louis Promenade until Ha-Gefen Street. At the center is the impressive, gold-domed Shrine of the Bab, the burial place of the Bab, the founder of the faith. One can enjoy some enchanting spots while strolling through the beautiful gardens by day, but with the special lighting, an evening visit provides equal pleasure and a peaceful, romantic atmosphere. 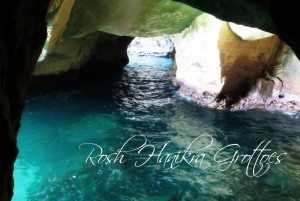 Continue via Naharia to Rosh Hanikra. The gleaming white cliffs of Rosh Hanikra and the beautiful stretch of beach below are a magnificent sight to behold. But the real excitement begins when you board the cable-car for your two-minute ride down the 210-foot cliff.

Last visit in Acre, known also as Akko, Acre’s walls, fortresses, castles, churches, mosques, synagogues and other structures tell the story of the many rulers that governed, fought for, built and adorned the City. Visiting Acre is an emotional journey to a glorious past and a one-of-a-kind experience, exciting visit to an ancient city with a young soul – a city declared by UNESCO as a World Heritage Site. Return to pick up point.

Having sampled a variety of what Israel, Holy Land has to offer, we are sure that you will keep fond memories of your spiritual adventure with us. If you ever want to repeat the authentic experience and spiritual feelings, we always will be here to assist you.

Thank you for traveling with Compass

While in the destination, you should expect:

Sunday, June 5, 2022
★★★★★
“ Excellent tour and this is coming from a full-time, 30 year veteran as a travel agent. I have been in a lot of tours. Our tour was personalized for our group and we saw twice and spent half the amount as the people they booked their tour with the cruise line. We felt very safe and cared for. I would highly recommend Compass Tours for my clients traveling to Israel whether by cruise ship or land tour.”
- Denise C

Wednesday, June 1, 2022
★★★★★
“ Everything was more than perfect! Our guide was very enthusiastic and made our day the best. He gave us a very complete info about all places we visited. Thank Enrique.”
- Andrés Anasi Castillo

Trip of a lifetime!

Monday, May 30, 2022
★★★★★
“ This organization is one of the best. This was our second tour in two days and both were incredible! We had this tour on Sunday may 29th unbeknownst to us this was a very special day in Jerusalem it marks their flag day. We had no clue why our ship decided not to go to Jerusalem but we still made the journey with the help of compass travel. Our guide Rotie had her plan and she was so informative and on task that she got us in everywhere and out in the perfect time. We found out after we left the area we were in became very tense and clashes took place. Our guides kept us safe and made sure we received the best experience as possible. I couldn’t thank you enough for the incredible time! Highly recommend!!”
- Theresa D

Monday, May 30, 2022
★★★★★
“ We had such an amazing time! Our guide was full of knowledge and funny as well his name is Enrique and driver was Greg. They made sure we got the most out of the very limited time we had. My favorite spot from this entire experience was Pitt final stop at the Sea of Galilee. The discovery of the village of Magdala was by far the most memorable spot I’ve ever been to! I can’t thank you enough for sharing this with us! Many people on our cruise had no clue what they missed. So happy we did our private tour!”
- Theresa D

Still have a question about this tour package?