On this tour discover the original Jerusalem settlement built over 3,000 years ago and now hidden beneath the ground. Start with an overview of Jerusalem from Mount Scopus where you can look down on an ancient Jewish cemetery, Garden of Gethsemane and Old City. See the Kidron Valley’s ancient Jewish tombs then go into the Old City through the Zion Gate. Walk through the fascinating Armenian Quarter with its brightly colored ceramics and enter the Old City’s Jewish Quarter. Here highlights include the Byzantine-era Cardo and the iconic Western Wall. We stop to place a prayer note in the Wall then leave the Old City through the Dung Gate. From here the tour takes you underground to the City of David. See the ancient tunnels hewn from rock to bring water to the city thousands of years ago from the Spring of Gihon. 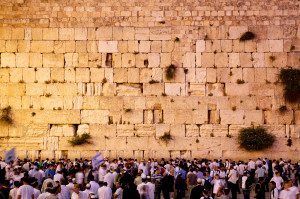 This City of David Tour and Underground Jerusalem Tour starts as we take in the view of Jerusalem from Mount Scopus. From here we can look down on an ancient Jewish cemetery and beyond the Old City walls to Temple Mount, site of the Dome of the Rock. On the slope of Mount Scopus, we view the Garden of Gethsemane and adjacent Church of All Nations with its stunning mosaic façade. The tour pauses at the Kidron Valley’s ancient Jewish burial tombs then we rejoin the bus and continue on to the Old City.

The Jerusalem tour takes us through the Zion Gate into the Old City’s Armenian Quarter where the tour guide will tell us about this unique community and their history. From here the tour continues into the Jewish Quarter to see the excavated 1500-year-old Byzantine-era Cardo, once the main thoroughfare of Jerusalem. Later the Crusaders build shops along this route where modern stores now fill the historic spaces. The highlight of any Jewish Jerusalem tour is the Western Wall; the last surviving part of the Second Temple that was destroyed in 70AD. Jews come from across the globe to pray at the Western Wall (Kotel) and place a prayer note between the wall’s ancient stones.
We leave the Old City via the Dung Gate and enter the City of David to tour underground Jerusalem. This excavated city is believed to have been the original settlement in Jerusalem dating back 3,000 years.

Ingenious subterranean tunnels were carved out of the rock to bring water from the Gihon Spring to the Pool of Siloam at the City of David. We pause at the Spring of Gihon before concluding the tour.

Return transfer after the tour to pick up point.

Write Your Review
Thursday, February 27, 2020
★★★★★
“ Excellent tour provided. Easy to book the tours online. Superb customer service on WhatsApp. Small groups. Guides are amazing. We booked 5 tours with Compass. Jerusalem, Bethlehem Jericho, Masada Dead Sea, Akko Haifa Caesarea, Nazareth Jordan River. Guides on each tour are the best, professionals. We definitely will recommend Compass tours to all our friends and family members for the next trip to Israel.”
- Rebecca Nill

Write Your Review
Wednesday, February 26, 2020
★★★★★
“ Great 7 days tour package with Compass Company. We spend 7 days in Israel, having the best time of our life. Starting from moment we made the reservation online, the pickup in airport, hotels, tours, guides and WhatsApp assistance before, during and after the tour just unbelievably perfect. If you want to travel to Israel, we recommend you contact Compass experts. Special thanks to Ruben, Benjamin and all our guides and drivers. Recommended 100% - for sure they are the best.”
- Carolina Berger

imageedit_14_2699087988
Sunday, January 19, 2020
★★★★★
“ We have the most wonderful experience in our eight days tour in Israel. Excellent assistance on WhatsApp, Thank you Ruben and Benjamin. All the staff are amazing -drivers guides. Recommended””
- Jackson

Write Your Review
Monday, December 30, 2019
★★★★★
“ We can’t say enough about how professional, personable and knowledgeable your tour guides are! We will be returning to Israel in another year and we will book every single tour with Compass! This was our third tour with you this trip and, as usual , the tour did NOT disappoint. We did Nazareth, the Sea of Galilee & Yardenit Tour from Herzliya on December 9th with Isaac. We covered a lot of ground in a day and Isaac made it one of the most memorable excursions of all in Israel. His knowledge, humor and attitude towards life really brought our bus of complete strangers together in a way that made us feel like family at the end of the day. When you consider there were people from England, Germany, Romania, Venezuela ...all of us learning and walking where Jesus had ministered 2000 years ago ...all enjoying, conversing and learning ...it was wonderful. We highly recommend Compass tours!!! We’ll be back!”
- Cathy & Jack Cohen

Write Your Review
Monday, December 23, 2019
★★★★★
“ Great. We really appreciated. Our experience with Compass has been very positive. Israel is a very beautiful country. We enjoyed and appreciated your country very much!”
- Nhan Judy

Write Your Review
Saturday, November 16, 2019
★★★★★
“ Compass is the best tourism company in Israel. No doubt about it. If u need tours, go for it. Super professional, not like most of israelis turism companies. Excellent service at very reasonable prices. Thank you guys. Keep up the good work.”
- Sabrina Reilis

Hello, Thank you for contacting us. We are dealing with thousands of reservations on a daily basis. We do understand the situation and all requests will proceed accordingly. We do not provide assistance ( temporarily ) via WhatsApp. All communications via email only, in order to monitor for later on. Thank you for your patience and understanding. Keep safe and God bless us all.