Explore four Israeli northern coastal sites – Caesarea, Haifa, Rosh Hanikra and Acre. Visit the ancient Roman port of Caesarea, continue to Haifa to the Baha’i Gardens on Israel’s Mediterranean coast. See the gleaming white cliffs of Rosh Hanikra and the beautiful stretch of beach below are a magnificent sight to behold. Enjoy beautiful seashore – Port of Acre in the Western Galilee. 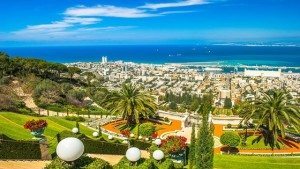 We drive along the coastal highway to Caesarea, city where past and the future come together. While new Caesarea is graced with magnificent modern homes, ancient Caesarea offers tourists the ruins of unique, impressive buildings. A tour of the Caesarea National Park is like walking through a story, and wandering between the ancient buildings one can both sense how people lived here thousands of years ago and enjoy modern, contemporary experiences, such as the enthralling musical performances held in the beautiful Roman Theater.

Next we proceed to Haifa, third largest city in Israel and one of its prettiest; Haifa has a lot to offer visitors. It has the Israel’s largest port, a particularly active beach and is the home of the World Center of the Bahai Faith. The Bahai’s originated in the Bab sect which separated from Iran’s Shi’ite Islam in 1844.

Visit The Bahai World Center, an expansive and well-designed complex on the slope of the Carmel, is famous for its magnificent gardens. It includes the exquisitely landscaped “Hanging Gardens” which run about a kilometer along the Louis Promenade until Ha-Gefen Street. At the center is the impressive, gold-domed Shrine of the Bab, the burial place of the Bab, the founder of the faith.

Continue to Akko to see the impressive underground Crusader Halls, which were built by the Hospitallers Knights .They contain a complex of six halls, a recently excavated large hall, a dining room, a dungeon and remnants of an ancient Gothic church. Walk through the Old City of Acre to see the Oriental Market and the Acre Port. Acre – a city declared by UNESCO as a World Heritage Site.

Continue to Rosh Hanikra. As you walk through the artificial tunnels and view caverns carved out by the pounding waves of the Mediterranean, you’ll enjoy the myriad shades of the water and the dramatic play of light and shadow it casts. The strange sounds the waves make as they rush in and out of the caves make it easy to believe the old legend that a pair of star-crossed lovers used to meet here, and the voice of the would-be bride can still be heard. Return transfer to pick up point.